Two great London gigs a stone’s throw from Kings Cross, with Fiddletails-featured musicians as you’ve probably never seen them before!

Info and tickets here  (Note late performance times – but Kings Place is only a short walk from Kings Cross tube.)

Fiddler Laurel Swift clogs and swings double bass in this extraordinary band playing ‘ultra-modern ancient music that’s wild enough to dance to! Gadarene transform obscure English 18th and 19th-century tunes with arrangements drawing on styles from funk and reggae to electronic and trance. With clogs and drums, mandolin, double bass, fiddle and flute, the band celebrate the release of their new CD’.

When At War on the Ocean

It’s one of those weeks when you can step up to the plate and learn a set of tunes, or just kick back and focus on one. Or of course just kick back…

Oss is an English trio playing English regional ‘gems and forgotten songs’ unearthed from manuscripts. The featured tune is John Dipper’s reworking of a traditional English tune, played second in a surprising set with the lovely ‘Dance’ from Purcell’s 1688 opera Dido and Æneas.

(Worlds collide for me this week — I sang chorus in this opera at school!) 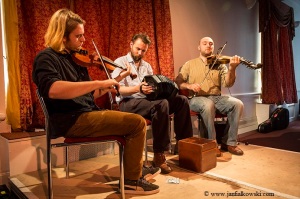 These guys really get around – here are just a few of their individual musical projects:

Plays with many collaborations, including the Ceilidh Liberation Front, and for the Belles of London City Morris.

Co-hosts and teaches at East London’s great Trad Academy. (Look out for his amazing bones workshops, and read the fascinating esoteric notes on his handmade bones in his online shop!)

And not forgetting… The Hobbit soundtrack. (See John’s website above for other projects.)